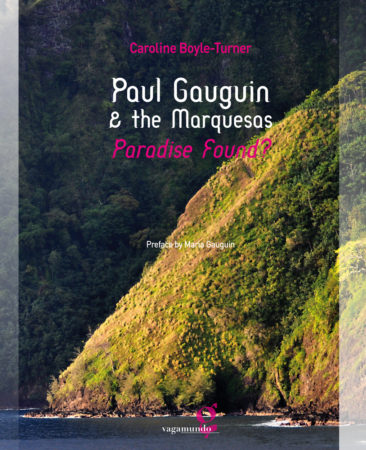 While the work Gauguin produced in Tahiti has been extensively catalogued and analyzed over the past century, his last years in Atuona on the island of Hiva Oa in the Marquesas have received only glancing attention. The art and writing from this period nonetheless show a deep engagement with questions of traditional Marquesan beliefs, colonial and church authority and changing defi- nitions of “exotic”. Caroline Boyle-Turner focuses on the challenges Gauguin faced to intercede, invent, interpret or even ignore these complicated and often conflicting issues as he developed a powerful and poetic body of art.

Paul Gauguin and the Marquesas: Paradise Found? is based on detailed research that focuses on the writings and the works of Gauguin himself. His letters and especially his book Avant et après are quoted extensively – what better voice is there to understand his art than his own words? Yet Gauguin worked hard to create a not always accurate myth of himself as both a poet and a savage. The author of this book untangles some of these myths by burrowing into colonial records in France, the Musée de Tahiti et des îles and the Société des Études Océaniennes (both in Papeete) as well as the resources of the Musée du quai Branly, Musée d’Orsay Documentation Center, the Bibliothèque Nationale and the Service Protestant de Mission DEFAP in Paris. The author’s discussions with Gauguin’s Marquesan descendants, archeologists, anthropologists, botanists and historians who specialize in South Pacific studies broaden the understanding of Gauguin’s surroundings, both real and imagined.

Dr. Caroline Boyle-Turner has studied and written about Gauguin and the Pont-Aven group of artists since the late 1970s. Her doctoral dissertation on Paul Sérusier (Columbia University, New York), was published in 1983. Six other books and exhibition catalogs followed: Paul Gauguin and his circle in Brittany; The Prints of the Pont-Aven School (1986) which was translated into French, German, Hebrew and Japanese; Paul Sérusier, la technique, l’œuvre peint (1988); Jan Verkade (1989, Van Gogh Museum and Quimper, Musée des Beaux-Arts); Les Nabis (1993) and Sérusier et la Bretagne (1995). As founder and director of the Pont-Aven School of Contemporary Art (1993-2008), she focused on teaching and bringing together 3rd and 4th year art students from all over the world to create in Pont-Aven.